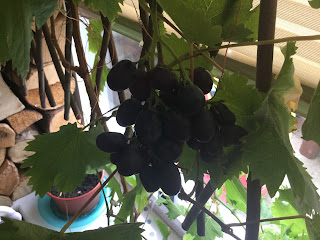 These beauties will be my lunch today accompanied by some left over St Agur  cheese and crackers. (From my Dads 92nd Birthday lunch.) When I planted this vine last year, the label staid a white dessert grape, but I will enjoy the

red. They have pips unlike the shop bought grapes these days. I think finding the pips is good fun. It reminds me of grapes in my youth. No seedless in those days.

I had a stroll around the garden this morning in the cool breeze. What a treat this is. I think short lived. I am so much more productive in cooler climes. I planted some “Munchkin Pumpkins” just for fun. I thought the children would enjoy them. They are bigger than the seed pack suggests so my homemade compost must be working. 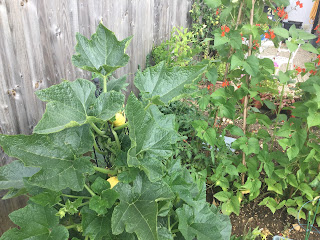 The tiny Christmas tree seems to have doubled in size. It came in a pot from Waitrose. Bought by my son, it ended up being planted because I can’t bear waste. The hot weather doesn’t seem to have affected it. 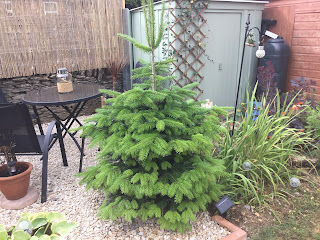 My post is cut short as someone has woken up from his morning nap and needs a nappy change. 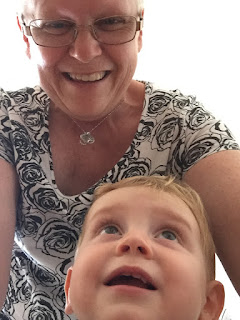 The icing on the cake 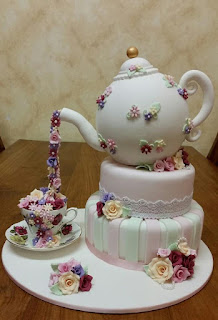 BT have finally provided me with broadband. I have missed blogland and have had a good catch up  tonight. The good thing is, because it is the BT summer sale, it is now cheaper than when I first requested their services. This is a very good thing as it has been a sad week. Vera the van didn’t pass her MOT. Some welding is needed. The garage was puzzled why there was not an advisory on the last MOT. Corrosion doesn't happen that quickly. When they investigated who did the last one, it seems they are no longer in business. This is no surprise to us as when we bought it, within 3 weeks of its MOT, the exhaust fell to pieces. I think the sellers saw us coming. We are grounded for now. We must enjoy, or do I mean endure, the Mediterranean temperatures of our staycation. Welcome to new followers. I am now back in the room with my new superfast, fibre optic broadband. So far so good, but it is only day one.

For a long time that was the catchphrase for BT. I have been absent for a while due to the biggest communications company in the UK. I have talked to Ramona. Thanansis, Mohammed, Ankara,
Mehmet... None of these have been able to help. I have a brand new router for super duper fast broadband. It isn’t happening.Apparently Talk Talk my previous provider,  have given the wrong code to them and will not admit to it. The only way I can move forward is to cancel BT and start again with a new phone number. I have spent many an hour waiting to talk. I have talked to TalkTalk who say BT should sort it out. BT are blaming TalkTalk and so the story has gone on and on. It is amazing how this has made me feel. Isolated. I hate the fact that I have become reliant on broadband for my communication needs. I don’t even have a landline to use at the moment. My mobile network has little or no signal where I live.(although the company states otherwise) I have gone back in time where if you needed to make a phone call you had to ask a neighbour who was wealthy enough to have a phone or use a coin operated phone box. Whatever happened to those? I could do with one at the moment. But I have survived. Nothing terrible has happened. I have had to live a different way. In some ways I have found it pleasurable. I am not at anyone’s beck or call. I haven’t idled time away on my iPad. I even bought a newspaper for the first time in years. So, I need to decide whether BT or TalkTalk are worthy of my custom and have decided they are not. They may be big companies with fancy advertising and offers but do they come up with the goods? No they do not. I will be going elsewhere.
I am currently at my daughters home catching up with my favourite blogs.
We have had a lovely trip out with Vera the van last weekend. We went to a site in the forest of Bere in Hampshire. It was very hot and we felt like we were abroad in warmer climes. 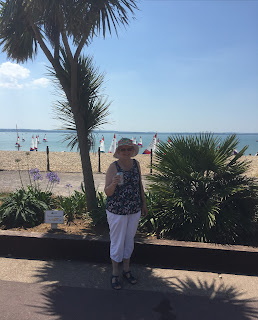 This was Lee on the Solent. With 30 degrees and the palm trees it looked like a Spanish resort. 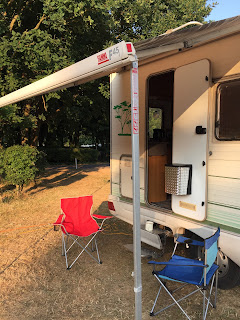 We pitched up in the shade of some trees. 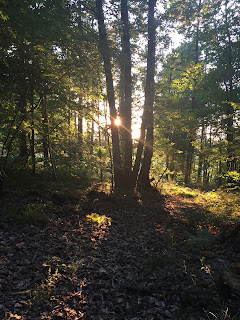 The forest was cool in the sunset. 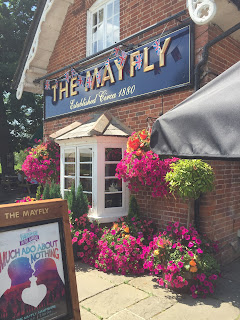 On the way home we treated ourselves to some Sunday lunch  at a riverside pub near Stockbridge. It was too hot to cook in the van. 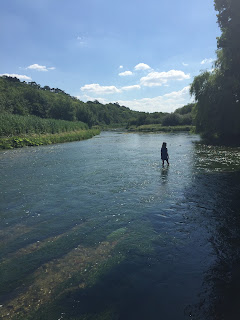 This little girl had the right idea and went for a cool paddle in the river Test. The water was beautifully clear.
I am enjoying some cooler days before it heats up again at the weekend. Hopefully the OH is keeping up with the watering in the parched garden.  Communication with him has been sparse. No trips out planned this weekend. I will enjoy some time in the garden if I can find a shady spot. There’s even talk of rain. That will be as exciting as it gets.  My edit tool isn’t working again so apologies for the layout. See you all soon I hope.