Brr there is a nip in the air today. The cloud has gathered now it is afternoon but still has Been a bright day. Dave the Diamond has made me a raised planter out of an old wooden gate and bits and bobs out of the shed. 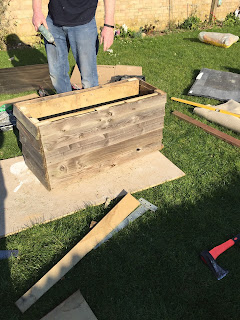 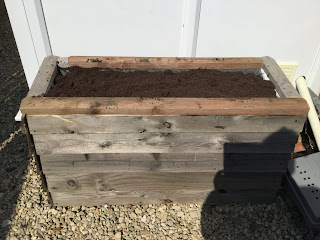 I am very pleased with it and it cost nothing. I filled it up with topsoil from the veg plot and  homemade compost.
We wanted to keep busy as we were very anxious today.
My daughter and family have been struck down with probable Covid 19  in Essex. My son in law started it off with mild symptoms 2 weeks ago. He works in the city. (Working from home now) and then my daughter who was ill enough and just recovered. Now 10 month old little Artie has symptoms and had to go into hospital as he had a temperature of 41. The hospital  resorted to ibuprofen in the end to help but the consultant wasn’t happy to do it as it is not recommended at all. However, it was all they could do. It worked to bring down the spike. They gave him oxygen for a few hours as his breathing was laboured. His chest X-ray showed nothing bad.  He’s home now and we are wrecks. 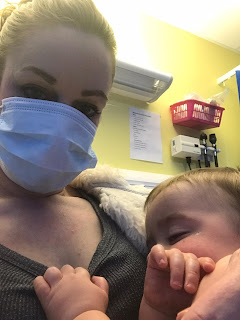 We could not have been there to physically help as no one can. I am  hoping he will not have a temperature spike again tonight. Scary stuff. Daughter has nothing but praise for the treatment. They were totally isolated, gowned and masked. They were the only ones in triage so that was heartening to hear and it seems to be rife where they live. For anyone thinking this is a mild disease, yes it can be for some like my son in law but not for everyone. Babies are usually not badly affected but this is such an unknown virus that we can’t predict. Stay safe everyone.
Posted by janipi at 18:01 4 comments:

There are quite a few holiday cottages around here and although people have been asked to stay home (mostly London and Greater London) we know they haven’t. It is still easy enough to keep your 2 metre distance if you are savvy about the local paths. This is just 5 minute walk from my house. 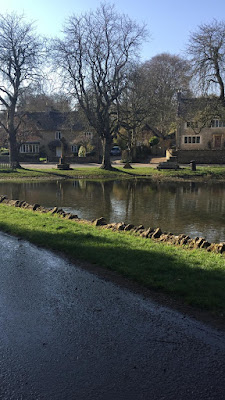 There is a little gate in between the houses that opens out to this. 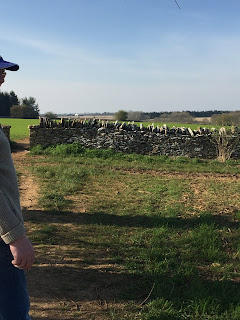 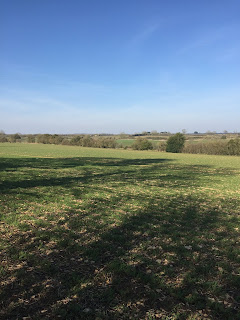 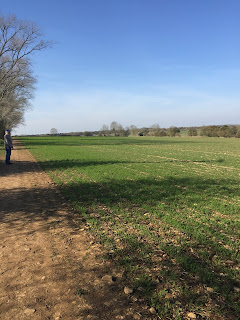 It is a public footpath that says Burford 2 miles. You can walk over the rolling hills away from the main road. It is quite hidden so not everyone realises the gate isn’t someone’s garden. It was so peaceful. We saw red kites and heard bird song. The blue skies and sunshine makes our daily exercise joyful.
I haven’t been to the shops for 8 days and think we can stretch another 2. I feel for people who are living alone. I hope all this makes us appreciate how lucky we have been to have freedom to go where we like and buy what we like. I think life might change a bit after this and we will be more mindful of what we have and how lucky most of us are.